When I was a kid, I read a biography of George Washington Carver. In it, the author recounted a speech by Booker T. Washington. In this speech, Washington told the story of a ship on a South American shoreline. The ship kept sending emergency messages asking other ships for drinking water. A responding ship messaged back, “Cast down your bucket where you are.” After a few frustrating rounds of this exchange, the first ship reluctantly let down a bucket and came up with fresh water from the Amazon river. The water they’d needed had been there all along.

I’ve read about this speech subsequently and confess that I don’t grasp its significance in history. Several websites say that it was addressed to freed slaves to urge them to stay in the South, while my book said it was addresssed to local business owners urging them to hire the freedmen. But I do remember clearly the impact the quotation had on me. It told me to look to what’s actually available instead of casting about for resources or talents that aren’t there. Work with what you have, instead of pining for something that you lack.

So what does that have to do with a picture of Mark and me goofing around in plastic Viking helmets? The answer is that this picture was taken on the Viking Tour in Dublin, where we visited last weekend. The city is lovely, and the tour was both hilarious and totally touristy. We embraced our not-so-inner tourists and wore our helmets proudly for the duration of the journey. We roared at our enemies, the Celts (i.e., tourists on competing companies’ buses), and laughed at the truly terrible jokes our guide told. I briefly considered how one might do the YMCA motions with the helmet but decided not to try for fear of putting out Mark’s eye. Any dignity we might normally possess got to take a breather and go have a coffee, kind of like the goalies for Real Madrid do when that team plays a lopsided game.

Let me hasten to add that we took in more sophisticated fare than this tour. We saw St. Patrick’s Cathedral, with Jonathan Swift’s legacy as much in evidence as St. Patrick’s. We goggled at the intricacy and beauty of the Book of Kells and the bookish grandeur of Trinity College’s Library. St. Stephen’s Green offered a lovely respite from the bustle of the city center. The displays of gorgeous gold ornaments and distorted, wizened bodies buried in bogs topped off the wonders in the National Museum. And thanks to our delightful friends and hosts, Kathy and Martin Langan, we had a fun pub night complete with Irish folk music and dancing, a trip to adorable Kilkenny, and tours of two castles – not to mention a comfortable place to stay, delicious food to eat, and lots of genial conversation.

But as adult as all of this sounds, we’re still embracing our tourist personas when we travel. And we’re dancing with, at least in my case, more gusto and abandon than skill and grace. We’re trying new food and drink even when they’re messy – I’d heard of a milk mustache, but a Guinness mustache was a new one to me. Apparently it’s a thing. We’re playing air guitar and practicing percussion on the tables when we go to bars to listen to loud, fast music. (Note: Do not, however, use a napkin dispenser for a drum. They explode. Don’t ask me how I know, but I swear it wasn’t me.) And we’re speaking dreadful Spanish to what must be the most linguistically patient populace on the face of the Earth.

In other words, we are casting down our buckets where we are. When you hit your sixties, you realize that you don’t have time to be anyone else besides yourself. There is nothing left to prove. It’s just you and the bucket and the Amazon- or, in our case, the Mediterranean. So if there’s a little too much giggling in our videos or too much goofiness in our pictures for your taste, please bear with us. We are drinking the water of our lives, fully and joyfully, till it runs down our faces and soaks our clothes. And we are more grateful than it’s possible to express for the opportunity. 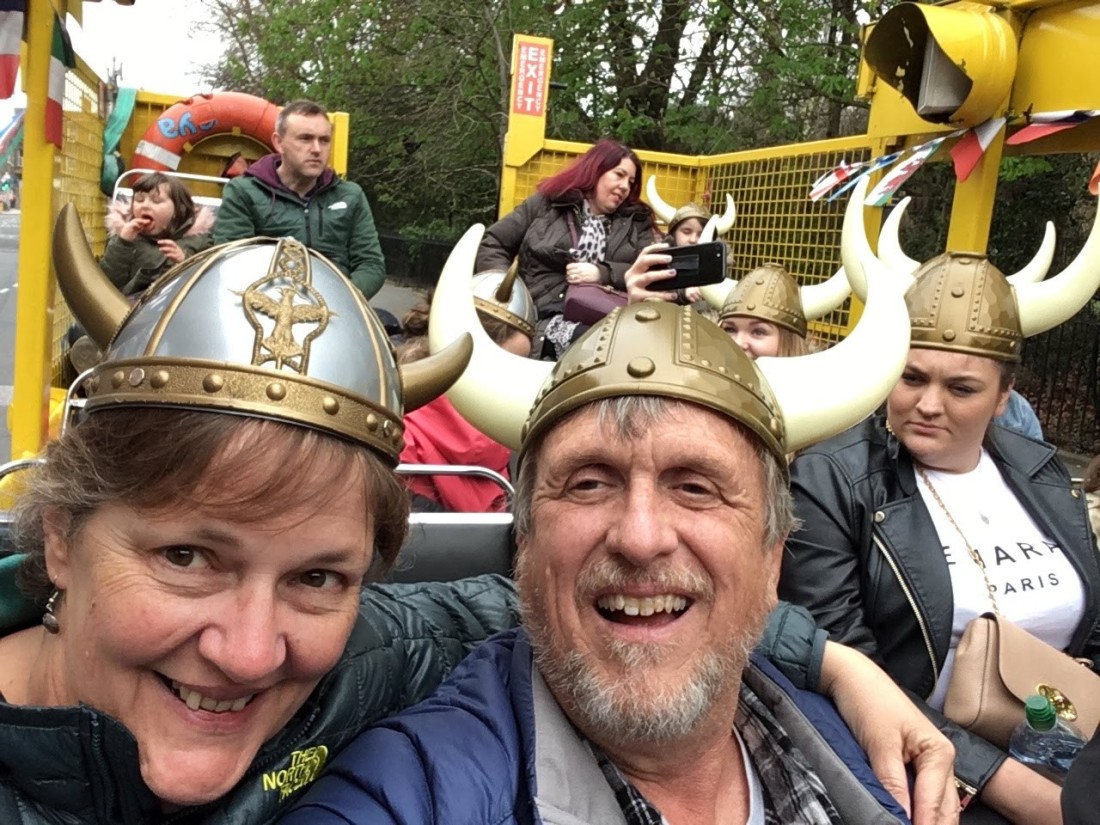