Both of our daughters enjoyed their time in Girl Scouts. (I was a one-season Bluebird; I think my mother picked the organization because the uniforms were blue, her favorite color, as opposed to the Girl Scout green.) I remember our Mary during her Brownie days coming home with a ditty that struck me as particularly wise. “Make new friends, but keep the old/One is silver and the other gold.”

This song has been on my mind lately as we make new friends in Spain. Frankly, my biggest concern as we started our adventure here was that we would not make friends the way we have in the US. We’ve been incredibly fortunate to have amazing friends in Austin, through church, our neighborhood, the kids, bar associations, book groups, and the like. We enjoyed an active social life and spent many happy hours most weeks with our dear ones. So coming here, the question loomed large: would we find friends?

Fortunately, the answer to that question has been a resounding yes. We’ve made lovely friends here, mostly through the church we attend and through the U3A. For those of you who don’t know the U3A (I didn’t), here’s a brief explanation. The University of the Third Age (Third Age being a tactful synonym for being older and probably retired) is a worldwide organization that promotes education and provides a way to meet new people. Our local U3A sponsors weekly coffees (10:30 on Thursdays, in case you’re in the hood), bus trips (we’ve been to a local microbrewery and to Benidorm, a nearby city, on U3A bus trips), interest groups (I’ve joined a book group, and we both have joined a walking group), and social activities (we’ve been to a dance and intend to join the cinema group). Joining groups has led to more individual interactions; this Saturday, for example, we’re hosting two couples from New Zealand for brunch and going to dinner with the only other expats from the US we’ve met here. All are folks we met through U3A.

I think these expats are especially open to new relationships because we’re all in the same boat. We’re far away from our home country buddies and are therefore open to finding new people to socialize with. But it actually goes deeper than that. We have instant common ground because we’re all dealing with learning Spanish and adjusting to new homes and shops and neighborhoods. And there’s another thread as well. These are people who love to travel. From day trips to long excursions, journeys abound, and it’s fascinating to hear about experiences in Ireland, France, Croatia, Germany, South Africa, Egypt – you get the idea. I keep telling people that despite all of the traveling we’ve done lately, my list of places to visit just gets longer. You can blame my new pals for that.

But as the Girl Scout song says, while new friends are wonderful silver, old friends are precious gold. The picture attached to this post is of us having dinner with Len and Nancy Green, friends of ours since the 1980s when Nancy came to Baker & Botts, the law firm where Mark worked. They only practiced together for a few years, but the four of us have remained pals since then. Our kids even went to the same preschool!  Their children, like ours, are grown now, and their daughter is teaching English in Sevilla. Nancy and Len are in Spain to visit Hallie and see some sights, and we were fortunate enough to cross paths in Madrid. Catching up was fabulous, and we closed down the restaurant Tuesday night.

More gold will come our way this weekend. Two friends from Austin, Annette Jones and Susan Spruce, will come on Sunday to stay with us for several days. Susan was one of the first friends I made when I moved to Houston after law school (we’re talking 1983 here), and through her I met Annette, who performed the wedding ceremony for Mark and me. Silver friends became gold, and we couldn’t be more delighted that we get to have them here with us.

Of course, we will have lots of reunions with our US friends this summer. After visits with the kids in the Midwest and dear pals in Oregon, we’ll arrive in Austin in late June and stay till late July. We’ve already scheduled a few dinner dates and such but would love to hear from others who might be up for Tex-Mex or barbecue. Just let us know! We are grateful beyond words for the silver and gold people in our lives. 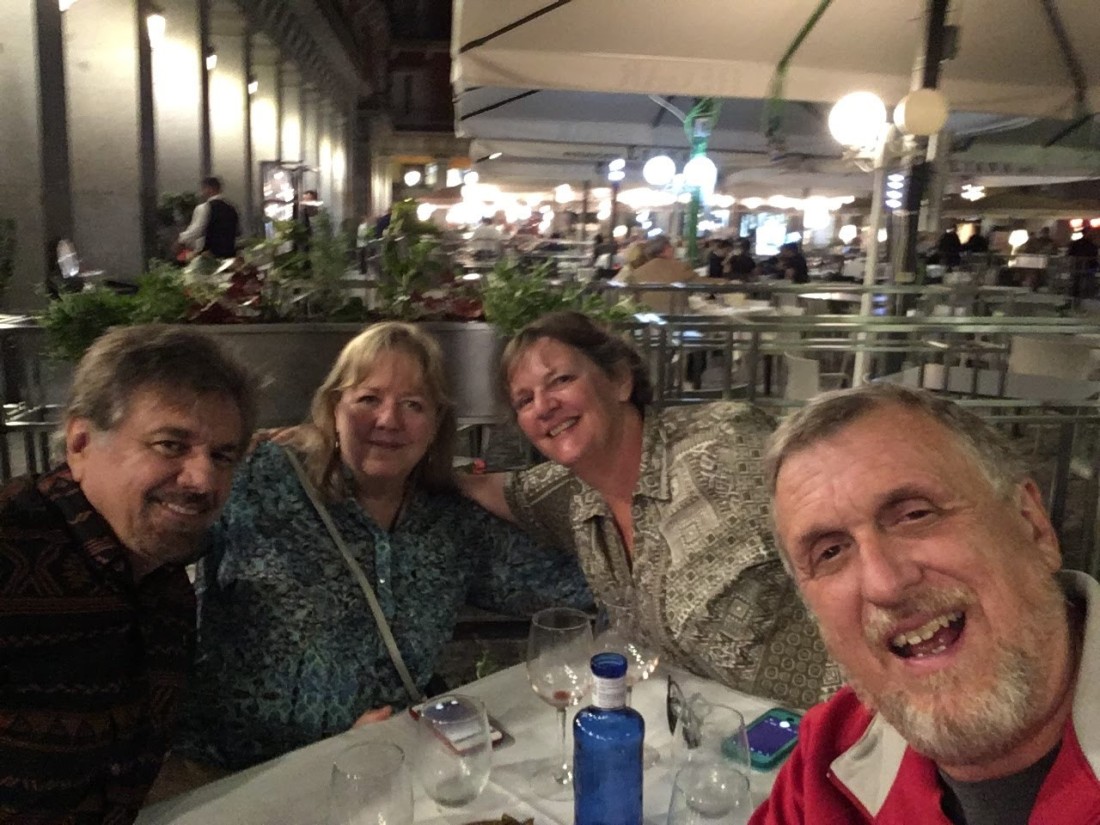