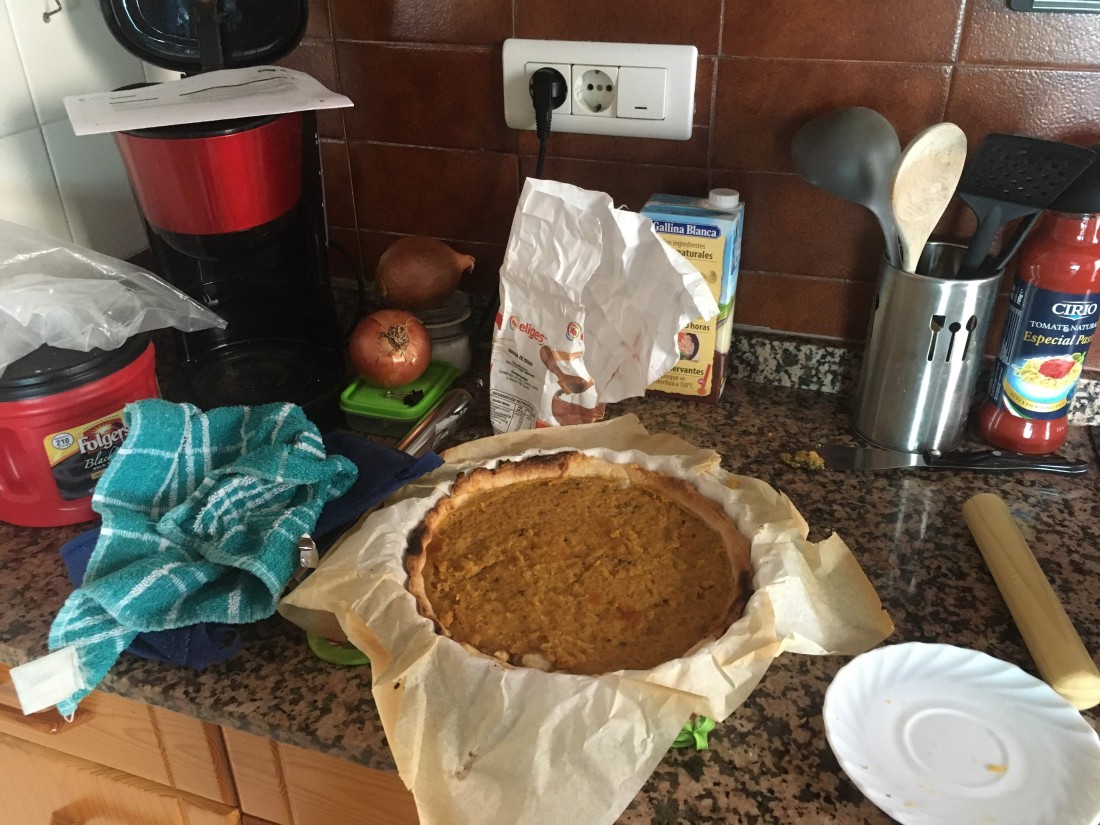 One of the many joys of parenting is the ability to enjoy the books that come from your children’s generation. A favorite at our house was The Magic School Bus series, which we enjoyed on TV and in book form – shout outs to Lily Tomlin and the Westbank Community Library, respectively. The protagonist of this series was the wild-haired Ms. Frizzle, a science teacher who regularly urged her students to “Take chances! Make mistakes! Get dirty!” Apparently the message sank with me, because this week Ms. Frizzle and I made a pumpkin pie.

This was a trial run pumpkin pie, in anticipation of celebrating Thanksgiving with two other American couples. Mark and I are providing the turkey and dressing, which we’ve been doing for years back in the USA. Others have volunteered to bring sweet potatoes, green beans, jello salad, and wine. We ordered cranberry sauce from an online vendor and are now the proud owners of the world’s most expensive Ocean Spray offering. Then it dawned on me that stores here, unlike those in the USA, don’t sell pumpkin pies. It sounded like a good idea to farm this problem out to more talented pals. To my horror, I got no takers on making the pumpkin pie. “I’m a cook, not a baker,” explained one friend. As a last ditch alternative and despite the fact that I’m not a cook or a baker, I decided that I’d give this pie-making business a whirl.

Let me clarify here that I’ve never made a pumpkin pie before. In fact, I’ve never made a pie. In further fact, I haven’t even bought a pie for several years, because my sister has done that bit for our November celebration. So to decide to make one is kind of like saying that I’ll be happy to drive a big rig from Boston to San Francisco. My experience with big trucks is pretty much limited to nearly getting killed by them on Interstate 35. But what the heck, you never know until you try.

Figuring I’d start at the bottom, I went to look for prepared pie crusts. Surprise! At least where we live, stores don’t have those. Spain, apparently, is not much on pies. When I asked at the biggest store around for a borde de la tarta, all I got was a blank look from a woman stocking the freezer case. “I don’t know what that is,” she responded, piling bags of frozen Kung Pao chicken onto a shelf. Uh oh. This meant I was going to have to make a pie crust.

In case you’re not a female who grew up in the South before, say, 1975, you probably have no idea what it means to make a good pie crust. This is one of the pinnacles of womanly achievement. To say “She sure makes a light, flaky pie crust” translates as “She can cook, sew, apply perfect makeup, and keep her husband (whom she secured partly by dint of said pie crust) happy, and she’ll never wear white shoes before Memorial Day or afternoon Labor Day.” Other than the husband part, none of these is my aspiration or my reality, although I do cringe if I wear white shoes out of  season. And I mentally apologize to my grandmother, who’s been dead since 1967.

Girding my baker’s loins, I found a recipe and began cooking. It soon became clear to me that Houston, we have a few problems. For starters, we don’t own a pie pan. After briefly considering the paella pan as an option, I recalled that we possess a baking dish for vegetables, so that’s what got used. Then came the thorny question of the fact that all the recipes call for electric mixers, which we also don’t own. I decided that pies predate mixers and got out a spoon. Last but not least, Spanish stores do not appear to stock shortening. Who knew I would ever long for Crisco? My plans for personal use importation are underway. In the meantime, Google says that you can substitute more butter than it seemed one dish could possibly take for shortening, so I got another tub of butter and proceeded. In hindsight, it would have been more economical and, possibly, efficient to rent a cow and a churn, but there you are. To make a long paragraph not quite as long as it could be, an acceptable pie crust appeared some time later. It wasn’t light and flaky, but it was adequate. Perhaps I should re-try makeup one of these days.

Anyway, now it was on to the pie filling. Naturally, no convenient cans of pumpkin were to be had. We did find pumpkin pieces; this obviated the need to purchase a pumpkin, disembowel it, and cut my fingers to ribbons trying to get the meat off the shell. Score one for the home team! Evaporated milk was also available. So now we’re just looking for spices, which Google Translate and I figured out in only three trips to the grocery store. Now it’s assembly time.

And now it’s roadblock time as well. All of the recipes for pie filling that I found assumed one of those nice, convenient cans I didn’t have. So I need to liquefy the pumpkin. Just trust me when I tell you that a food processor doesn’t cut it here, literally or figuratively. Rejecting the notion of premiering the world’s first pumpkin bits pie, I decided to stew the results of my efforts with the food processor. But that requires liquid, so I added a smidge of apple juice to my bits and stirred the whole shebang in a pot. Apples and pumpkins are sort of alike, right? They’re both roundish Autumn fruits. Besides, the other other liquid choices I considered were chicken broth (yuck), orange juice (too tart), and Scotch (best saved for the cook in case of emergency). I was so unnerved by this process that the option of adding water never occurred to me. Criminy.

That crisis averted, I added the evaporated milk and spices, per the recipe. This was going to be the easy part, right? Wrong. To my dismay, the consistency of my pie filling was that of a cream soup. Baking will firm the filling up, of course, but firming this mess up would take a blast furnace, not my funky Spanish oven. What on earth was I going to do?

I did, of course, what any red blooded American would do. I reverted to middle school behaviors and chewed on my fingernails. One of them promptly broke, which turned out to be the best possible thing that could have happened. Here was a problem I could solve. I sat down on a chair on the balcony, filed my nail, and contemplated the Mediterranean. And the peace of God, which passeth understanding and bringeth creative ideas, settled on me and brought to mind the sieve. So I returned to the kitchen with a renewed heart and sieved my filling into the merely wet ingredients and the basically liquid ingredients. The merely wet I poured into the pie shell, and the super liquidy part I finished cooking and put into a leftover dish in the fridge. Pumpkin oatmeal is delicious!

Aside from burning the crud out of the top of the pie and peeling it off before taking the attached picture, the pie turned out okay. We’ll see whether pumpkin pie 2.0 works out, but at least I followed Ms. Frizzle’s advice. I took a chance on a new baking process, made my share of mistakes (and somebody else’s), and definitely got very dirty. (Hint: My version of mise en place is mise all over the place, and I had to take a shower while the pie was baking.) And then there was pie. May all your risk-taking turn out as sweetly.