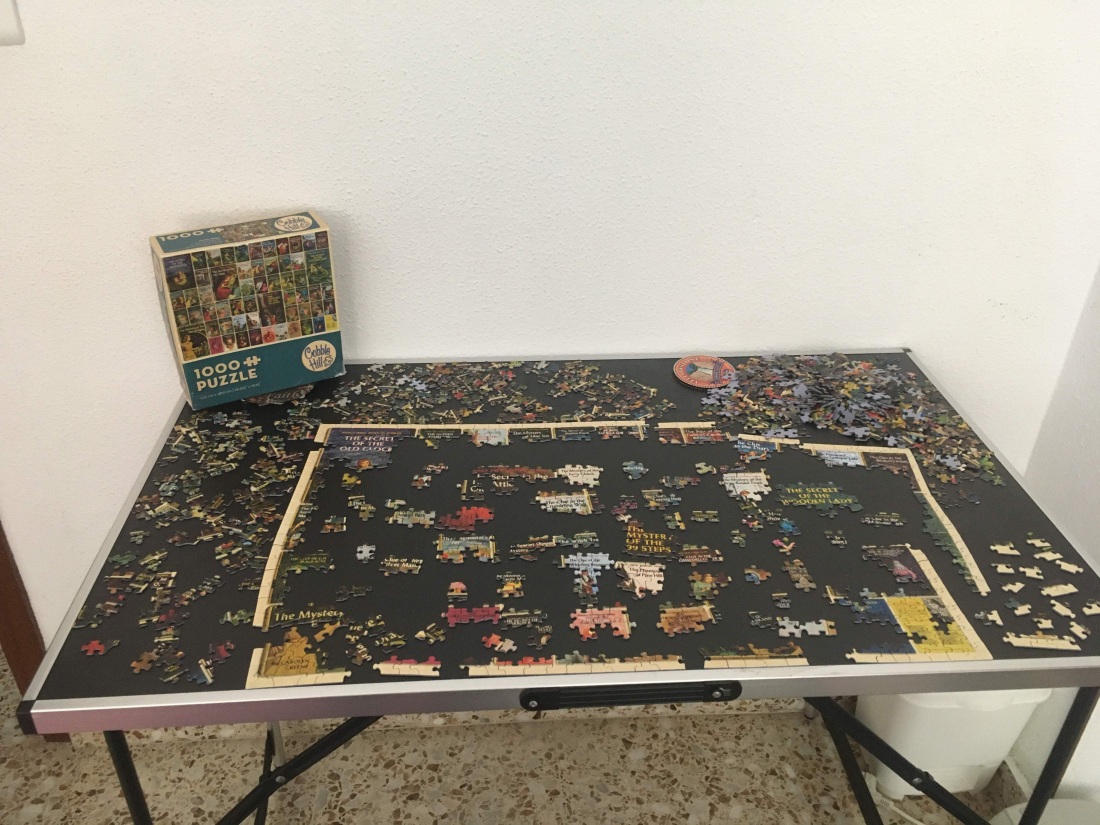 I try to read just enough news every day to stay informed without being driven crazy. This balance has been hard to find lately, as reports of protesters clamoring for their God-given right to go to Applebee’s instead of staying home to avoid spreading dangerous infections fill not only news sites but also my Facebook feed. My friends are pretty much incredulous in the face of these folks, and I have to admit that I agree that the protestors appall me with their lack of knowledge and empathy. But I do have a theory about why they’re protesting.

Over the years, I’ve interacted with a fair number of people on what I consider to be the far right. Many of these folks hold extremely conservative views of Christianity, and virtually all are solid fans of the current administration. And they seem to me to have one thing in common: they like to be scared. They secretly relish fearing government takeovers and the wrath of God, in equal measure. Every era seems to have its favorite boogey men. When I was a kid, people talked about being afraid of Communism, the Pill, and fluoridation of the water supply. When I was in college, it was the Trilateral Commission, Scientology, and hairy-legged feminists.

We’re still living with delicious worries about the Rapture, which I first tumbled to in the 1980s and 1990s. In one notable family visit during this period, an in-law offered to amuse our kids by supplying them with a copy of the children’s edition of the Left Behind series. (That discussion went well, as you can image.) And this next bit Is slightly off-topic, but I do want to note that the men (and they were all men, which probably explains a lot) who decided what to include in the Bible pondered long and hard about putting in the book of Revelation. They stuck it in at the 11th hour. I maintain that this decision was an ill-considered last minute one, sort of like when you’re packing and decide to put just one more thing into your suitcase. That’s how you end up taking dress shoes on a hiking trip or why you include six pairs of tweezers in your shipment of household goods to Spain. As with five pairs of those tweezers, we would be better off if Revelation itself had been left behind.

Anyway, our list of demons du jour includes government takeovers and COVID-19, the latter mishmashing left-wing media, gays, China, Bill Gates, and the World Health Organization. People are brandishing firearms and badly-spelled signs at rallies in state capitals in the USA. They’re doing this because they are determined, impossibly, to force their way back to what life was like a few months ago. They are using the weapons they know and cherish: guns, claims of fake news, and right-wing Christianity.

The problem is that they didn’t get the apocalypse they wanted.

Lots of these folks have been preparing for an apocalypse for years. They have canned food (and one suspects, a great deal of the toilet paper that recently flew off the shelves in stores), generators, and arsenals. They’re ready for the battles that they’ve goggled over in movies and play-acted in video games. The plot involves saving people by being the best-armed badass in the neighborhood and protecting grateful and very good-looking women and children by laying down blazes of gunfire and explosions. Mel Gibson and Bruce Willis, back when they were good-looking, are the archetypes.

But our disaster is way off-script. You can’t shoot a germ.

Think about it. It’s kind of like putting up a Christmas tree, complete with lights, tinsel, presents, and carols in the background, just in time for Easter. The protesters’ equipment just isn’t terribly helpful, except maybe for the toilet paper. This isn’t an apocalypse you defeat by emulating action heroes. This is one you defeat by inaction and patience – by staying home, by standing in lines six feet apart waiting your turn to enter a grocery store, and by wearing a little fabric mask, not a maniacal expression, on your face.

The heroes of the pandemic are similarly lacking in derring-do. Medical personnel, for example, have brains and not necessarily brawn, education and not necessarily wise-cracking street smarts. For heaven’s sake, they wear scrubs and not ragged t-shirts. They pack N95s instead of AK-47s. And the other heroes of this pandemic? They’re also dramatically un-dramatic. They operate cash registers at grocery stores, fill prescriptions at pharmacies, and deliver Amazon boxes. They drive trucks, not crazily across a desert like Mad Max, but slowly and carefully through the near-deserted streets of cities. Even the police are a disappointment. People who violate stay-at-home orders are not taken down in a hail of gunfire. Instead, officers write tickets, all while wearing uniforms that now include surgical masks and blue Latex gloves. It’s enough to make Bruce Willis weep.

So I think what we’re seeing is anger at having been dealt a loser apocalypse. For my part, I’m all right with that, since I possess zero skills that would come in handy during a violent disaster. I can tear apart an argument but have no clue how to disembowel a zombie. I have shot a gun once, during target practice at a girls’ camp. However, that was before my vision needed correction, so shooting things now might be problematic. I might be able to drive Mad Max’s truck, but only if it had an automatic transmission. Good cup holders also would be a definite plus. And I’d probably signal as I was turning wildly to evade my pursuers – it’s a deeply-ingrained habit – thereby giving away my intended escape route.

I’m okay with this state of affairs. After all, I’m one of those people who closes my eyes on roller coasters and hasn’t seen a scary movie since 1980, when for a week I had to sleep with the lights on after seeing the movie The Shining. And, in the end, the parts of the Bible I cling to don’t come from Revelation. Instead, I’m thinking of the story of Naaman in 2 Kings. Remember this one? Naaman, a Syrian general, suffered from a skin disease and, understandably, wanted to be rid of it. He finally came to the prophet Elisha and asked for a cure. Elisha apparently was busy binge-watching Netflix or something when Naaman showed up, so all he did was send a message to the waiting dignitary to go wash in the rather unimpressive River Jordan. Naaman was not thrilled with either Elisha’s non-appearance or the simplicity of the proposed remedy. He wanted a bigger show for his healing. Finally persuaded that doing something easy wouldn’t be beneath his dignity, Naaman bathed in the river and was healed. Here’s a hero for our times. Let’s do the simple things that will save us all, like wearing masks and stay home doing Nancy Drew jigsaw puzzles. Let’s make this our kind of apocalypse.

7 thoughts on “Not the apocalypse they wanted”