Happy 2019! After a day spent touring the Pantheon and the National Maritime Museum, Mark and I rested before going out for late-night festivities. To be specific, I took a nap, and Mark worked on taxes. See why I married him?

After a dinner here at our apartment (salad and quesadillas- we found tortillas here!), we headed out to find some Fado. Fado is, as Mark observed, Portugal’s version of blues music: soulful and often sad, grounded in commentaries on life and love and lack thereof. Finding Fado is not hard in the Alfama, the district where we are staying. Finding a Fado place that wasn’t full was more challenging. Fortunately, a restauranteur whose big heart compensated for a decided lack of teeth on one side took pity on us and found us two seats in his establishment. Just to be good sports, we ordered bread, cheese, and wine, followed by flan, chocolate mousse, and more wine.

The Fado singer was an attractive woman in her thirties with a tight violet dress and the lung capacity of a person twice her size. A guitarist and a guy playing a mandolin accompanied her. Surprisingly, several of the songs sounded rather cheerful, and audience participation in the form of clapping (which I am very good at) and singing “la la la la da” (which reportedly I am not so good at) was encouraged. We could have been clapping and la la la da-ing about nuclear holocaust for all I know, since, of course, the lyrics are all in Portuguese. One song did appear to be about Lisbon; I swear she was singing about Mufasa in another one, although as many times as I’ve seen “The Lion King” you’d think I’d have recognized the tune if that were the case. Anyway, we left after I suggested to Mark that we should introduce the singer to “Deep in the Heart of Texas,” which has lots of clapping and might make a nice addition to her repertoire.

We headed down to the main square, which is featured in the picture below. A band played good old rock ‘n’ roll on a brightly-lit stage. I couldn’t understand them, either, but they may well have been singing in English. Or Portuguese. Or Latvian, for that matter, because the crowd was pretty noisy.

So midnight found us counting down with 20,000 of our new best friends, and happiness reigned when we got to 12 o’clock. The trick to this particular gathering, it turned out, was leaving. We successfully made our way into the crowd by following a group of people wearing oversized pink neon sunglasses. Any veteran of music festivals can tell you that people with oversized neon sunglasses of any shade are getting to the front of the stage come hell or high water, so it’s just best to clasp the hand of the last person in that line and tow your beloved along with them. Most of the time the people in the line are so drunk they forget who’s in their party, so you’re usually welcome to latch on.

That exercise made getting into the crowd fairly easy. Getting out was another matter. Sunglasses people generally don’t leave the party until the police politely suggest that such a move might be a good idea, so you have to pick someone else to snowplow for you. After a few misfires – the really big guy shouting in German was a dud, all hat and no forward motion cattle – I spotted a small woman with a ferocious expression and a very bad hair dye job. I figured if she was as determined to be gone as she was to be blonde, we were in good shape. So Mark and I made it home safely and with lots of memories of a great start to the year. 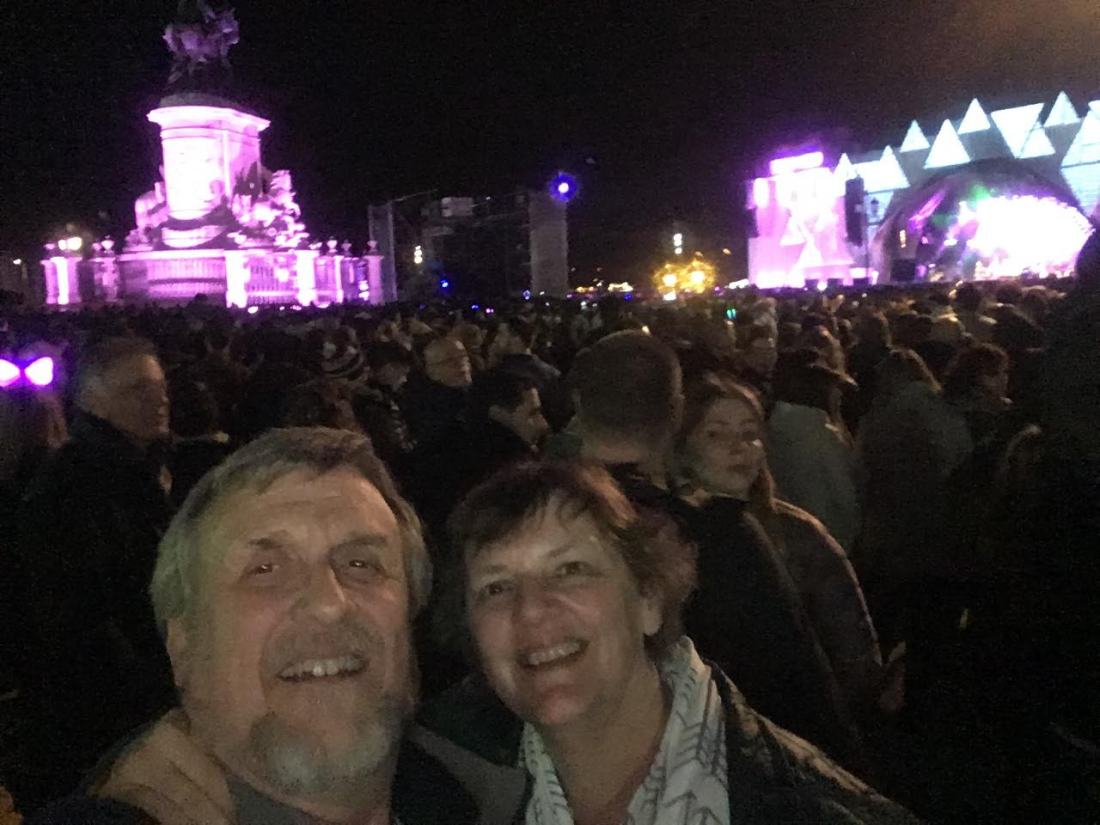